The Wreck Of The Madeira

We arrived at the first wreck site by car on August 4, 1975 and got suited up and in the water by around 10 AM. The air temperature was 78o, and the water temperature was 42oF.  No, I don't have that good of a memory -- I'm reading from a logbook that I kept at the time. My actual memories are visual and not at all numerically factual like that.

Unfortunately, I have been unable to locate the negatives or even prints from a roll of film that I shot on that first trip. I know I didn't throw them out -- I just can't find them right now. I'll have to rely on my memory, the Internet, and some shots my dad took at different times. 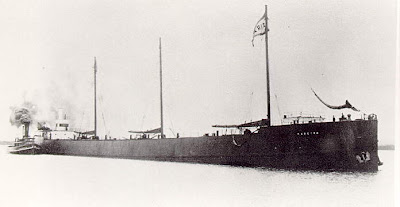 Madeira was the name of a vessel that went down in a huge storm of 1905. There's a harrowing story about her last hour that you can read about here. She broke in two against Gold Rock, less than a mile "up-lake" from the present day Split Rock Lighthouse.  Of course the lighthouse wasn't there then--it was built a few years later after the owners of ships that went down that night banded together and persuaded Congress to build one (I have a separate story about the lighthouse that I'm saving, but I should say that the lighthouse is the most iconic image of the North Shore, having been painted and photographed to death).

In those days one had to park alongside Highway 61 and carry the gear through a beautiful birch forest (one of the photos I'm missing) down to a small rocky beach. Here's an aerial view of the lay of the land: Link.
The rocky beach was as close as one could get to the wreck site on land.  Here's an older photo of my dad (standing) heading out to the Madeira wreck site. The photo was taken sometime in the early 1960's: 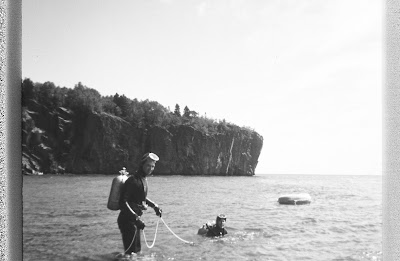 That's Gold Rock in the background, the rock that battered the Madeira to death that November when the skies turned gloomy.  On a clear sunny day when the water is still, it is possible to look down into the water from the edge of that cliff and see a bit of the wreck.

Madeira was my dad's favorite wreck. It wasn't the most photogenic, being too deep for natural light. But it was the most challenging and is still typical when one thinks of a shipwreck. The wreck lies in two big pieces. I'll never forget how her bow points straight up towards the surface and the steel of her hull where she broke looked peeled back like a banana skin. You can more easily imagine what I'm talking about with the help of this sketch: 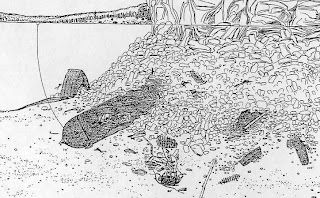 
The bow section is in the upper left.  [added: here is a photo of her bow taken by my father sometime in the '60's]: 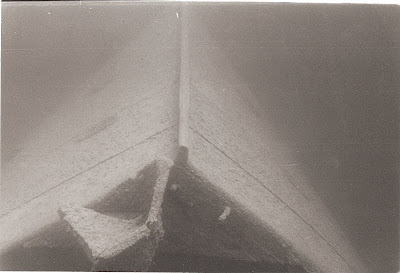 Obviously tremendous forces clashed that night back in 1905. Her stern lies in deeper water and the pilothouse lies even deeper, completely detached from the rest (in the very foreground in the sketch). My dad's friend salvaged the ship's wheel and other artifacts which can now be seen in a museum in Duluth. The other parts of the wreck are unrecognizable as a ship- just twisted bulkheads. The vessel had long since lost its coating of paint, but incredibly, the iron hull is remarkably well preserved--a combination of freshwater, cold, and depth.

The Madeira wreck is cold and deep.  I recall experiencing a little bit of nitrogen narcosis that first time when we plunged to the wheelhouse. I remember signaling my dad that we needed to go up a little. I still remember slowly crawling back up that pile of rocks towards the cliff.  In those days (1975) before the widespread advent of buoyancy compensators (BC's), I had an orange inflatable vest that required me to wrap my lips around the inflation tube and blow (nowadays, those things are hooked-up directly to one's air supply and one can adjust buoyancy with a push button). Although we were covered head-to-toe in 3/8 wet suits, there was this little gap between my face mask and the opening in the hood which exposed my face and lips. Now those body parts are pretty resilient to cold, but after mouthing a regulator for about 45 minutes in 42 degree water, my lips and mouth were frozen and I still recall the difficulty of getting my mouth around that smaller tube in order to re-inflate my vest--the sheer will to live overcame and triumphed.

There is a major treasure trove of Madeira photos here: Link
Posted by chickelit at 3:52 PM