The hourglass: The glass is silicon dioxide (SiO2) and the sand is as well (ignoring slight impurities like sodium and borate). SiO2 is the inorganic analog of carbon dioxide. Both are chemically spent, meaning they have no chemical energy left to give in a world surrounded by O2. So an hourglass is made from two forms of the same thing. There aren't too many substances that do that at the chemical level. Glass and plastics come to mind.
I wouldn't call glass a different "phase" than sand is -- they're both solids. But glass has no real microscopic structure whereas sand does. Pure elements do sort of the same thing when they form allotropes. I suppose that water does it when it forms different types of ice -- some crystalline and some amorphous. But water is unique in forming mixtures of water and ice. Here's a pretty photo of water & ice and sand & glass: 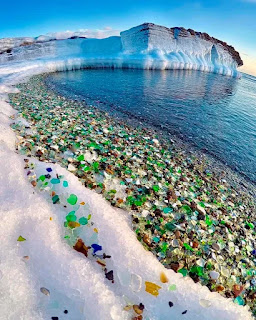 Maybe adding a little dry ice could liven things up. just to keep carbon in the picture.
Posted by chickelit at 3:40 PM