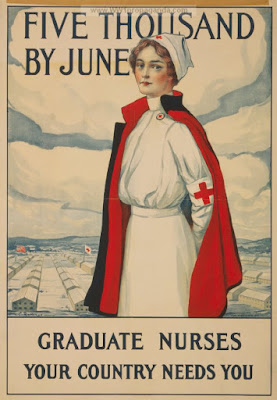 Educated Edinburgh School Of Medicine for Women. Active in Women’s Francise Movement. Founder of Scottish Women’s Hospitals and commanded units in Serbia and Russia. Died of illness due to war service, Newcastle, 26 November, 1917, at the age of 53.
[Reni, Rumania]

We have been awfully excited and interested in the news from Petrograd.* We heard of it, probably long after you people at home knew all about it!  It is most interesting to see how everybody is on the side of change, from Russian officers, who come to tea and beam at us, and say Heresho (good) to the men in the wards. In any case, they say we shall find the difference all over the war area....

Do you know we have all been given the St. George Medal? Prince Dolgourokoff, who is in command on this front, arrived quite unexpectedly, just after roll call. The telegram saying he was coming arrived a quarter of an hour after he left!  General Kropensky, the head of the Red Cross, rushed up, and the Prince arrived about two minutes after him. He went all over the hospital, and a member of his gilded staff told matron he was very pleased with everything.  He decorated two men in the wards with St. George's Medal, and then said he wanted to see us together, and shook hands with everybody and said, "Thank you," and gave each of us a medal too; Dr. Laird's was for service, as she had not been under fire. St. George's Medal is a silver one with "for Bravery" on its back. Our patients were awfully pleased, and impressed on us that it carried with it a pension of a rouble a month for life. We gave them all cigarettes to commemorate the occasion.

It was rather satisfactory to see how the hospital looked in its ordinary, and even I was fairly satisfied.    I tell the unit that they must remember that they have an old maid as commandant, and must live up to it!  I cannot stand dirt, and crooked charts and crumpled sheets. One Sister, I hear, put it delightfully in a letter home: "Our C.M.O. is an idealist!"  I thought that was rather sweet; I believe she added, "but she does appreciate good work." Certainly, I appreciate hers. She is in charge of the room for dressings, and it is one of the thoroughly satisfactory points in the hospital.

The Greek priest came yesterday to bless the hospital. We put up "Icons" in each of the four wards. The Russians are very religious people, and it seems to appeal to some mystic sense in them. The priest just put on a stole, green and gold, and came in his long grey cloak.  The two wards open out of one another, so he held the service in one, the men all saying the responses and crossing themselves. The four icons lay on a table before him, the three lighted candles at the inner corners, and he blessed  water and sprinkled them, and then he sprinkled everybody in the room. The icons were fixed up in the corner of the wards, and I bought little lamps to burn in front of them, as they always have them. We are going to have the evening hymn sung every evening at six o'clock. I heard that first in Serbia from those poor Russian prisoners, who sang it regularly every evening...

I have heard two delightful stories from the Sisters who have returned from Odessa.  There is a great rivalry between the Armoured Car men and the British Red Cross men about the capabilities of the Sisters. (We, it appears, are the Armoured Car Sisters!). A B.R.C. man said their Sisters were so smart they got a man on to operating table in five minutes after the other went off. Said an Armoured Car man: "But that's nothing. The Scottish Sisters get the second one on before the first one is off."  The other story runs that there was some idea of the men waiting all night on a quay, and the men said, "But you don't think we are Scottish Sisters, sir, do you?" I have no doubt that refers to Galatz, where we made them work all night.

*The Russian Revolution which led to an early ceasefire on the Eastern Front.

The letter is part of series called "Letters From Their Eleventh Hour" which I began a few years ago. The letters come from two books described here.
Posted by chickelit at 11:00 AM

Labels: 1917, Letters From Their Eleventh Hour, War Letters, WW I