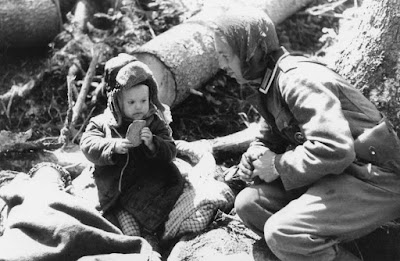 I go everyday into the village here to see a family with six children. The father is in the war.1 The woman says that he is a Reserve Dragoon. She innocently believes that he has not yet been under fire, but she has no news for two months. She sheds tears when she tells me that and hears that we get letters from home every day. I get hot water there so as to have a good wash after four days' interval., but I can't stop too long, as suspicious scratchings on the part of the children indicate undesirable house-mates.2

One does feel sorry for these poor people, who have hardly a stitch of underclothing to change into, not to speak of anything to eat--nothing left but potatoes, and the woman is always tearfully asking me how much longer she and her children will have to go on living like that. She is always lamenting over the war: 'C'est triste pour nous et pour vous." She lays the blame for it on the English and curses them. It makes her very unhappy when I tell her that we are making preparations for the winter and shall probably spend Christmas in the village. She just sobs helplessly. By way of thanks I leave her some bread and an army biscuit, which the children fall upon with shouts of delight. The youngest is five months old. It is true that one cow has been left in the village, by order of the Area-Commandant, to supply milk for the babies, but even so that is little enough. On the second day I gave each of the children two sous. The woman was very much pleased and touched by my sympathy. She followed me to the door and assured me that her house always 'à votre disposition.'

We all pity these poor people who are clinging to the last remnants of their former happy existence, though in constant danger of seeing all their possessions burnt and smashed up by their own artillery, and I hardly think that a single one of our soldiers would treat them with anything but friendliness. Many of the men habitually give them some of their bread. The inhabitants of the place gather round our field-kitchens regularly to collect their tribute. So we are seeing to it that our enemies' belongings do not starve. Kindliness is probably that part of the German character from which it derives its greatness. 'It is the German soul, that makes a sick world whole'3 -- and no doubt that means the German heart.

*The letter is part of series called "Letters From Their Eleventh Hour" which I began a few years ago. The letters come from two books described here.

1France and Germany lost comparable numbers of soldiers, but France and Belgium bore the brunt of civilian casualties on the Western Front.

Labels: 1914, Letters From Their Eleventh Hour, War Letters, WW I