The "tipping point" is a useful construct for understanding how things happen in real life--even in politics--and I tried making this point back here with the help of this graphic: 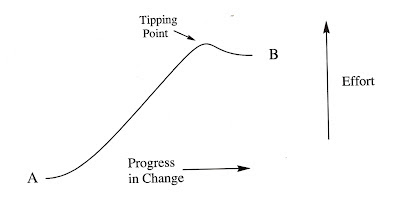 The notion comes from chemical dynamics which is the study of how chemistry happens at the molecular level. Chemical reactions have hurdles too and that cartoon is an easy way of visualizing energy barriers.

The tipping point is just another name for something important in chemistry called the "transition state." Henry Eyring at Princeton introduced the "activated complex" in 1935 as a specific geometric structure that is highest in energy along the way from reactants to products. Michael Polanyi (Eyring's mentor in Berlin) named it the transition state and that name stuck, but the theory, Transition state theory--remains more closely associated with Eyring.

Transition states are ephemeral, just as tipping points are in everyday life. Who's to say when they occur?  Yet they are the sine qua non of chemical reactivity. Tweeking them--to lower them in energy--is the goal of most chemical catalysis: link  A recent link put up by Instapundit makes this clear.
Posted by chickelit at 11:00 AM