Doing the aftermath of Becquerel's discovery

[continuation in part from here]

(1) Were other elements besides uranium radioactive?
(2) What is radioactivity? Was it it like X-rays?
(3) How to square radioactivity with the Law Of Conservation of Energy.

In the mid 1890's the Periodic Table looked like this:

Note that the noble gases (which had just been discovered--were absent). Also, nickel and cobalt were incorrectly ordered under group VIII as I mentioned here.

Marie Curie found that thorium (an element known since 1828) was radioactive in 1898.  There was a priority dispute with a German chemist, Gerhard Carl Schmidt which I'm still reading about. Thorium's importance briefly eclipsed uranium's, because the latter was in short supply until more sources could be found. Curie, along with her husband Pierre, began extracting uranium from samples of impure Czech pitchblende. They discovered that the purer they got the uranium, the stronger the radioactivity was in the concentrated waste left behind. This told them that something else was in there. They discovered polonium in July and radium in December of 1898, adding two new elements to the chart shown above.  In this way, radioactivity became a tool for discovering new elements. 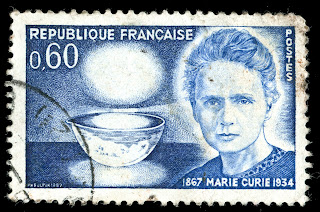 Posted by chickelit at 9:22 AM