Are The "Last Letters From Stalingrad" Forgeries? 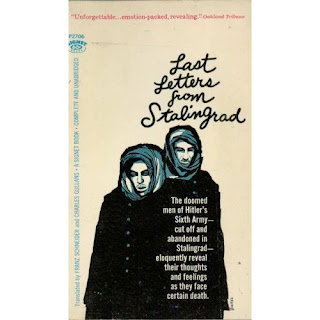 At Christmastime I like to revisit the Last Letters From Stalingrad. I did this last year. In a sense, I'm carrying on a Madison radio tradition begun in the late 1960s by George Vukelich.  I wrote about that here and even put an audio recording on YouTube beginning here.  You can read some of the letters I did last year here: link

Doubts about the authenticity of the letters are scattered around the Internet. Amazon reviews of the book here touch on the controversy (note also how pricey the out-of-print book is too). The German language link at Wikipedia link has much more on the topic than the English one. I've translated the relevant portion concerning authenticity:


Historians and media professionals first began doubting the authenticity of the Last Letters from Stalingrad in the 1960s. They claimed that they were either manipulated by a sole agent or were even outright faked. Initially, the evidence for this was a certain uniformity of style. Later, more and more comparisons were made to other letters found in Volgograd, in the Army Post Archives at the Museum for Communication in Berlin, or those collected from opened Russian archives and indexed as War Letters from Stalingrad.


The legal philosopher, jurist and Hegel-scholar Wilhelm Raimund Beyer, who himself participated in the Battle of Stalingrad, vehemently questioned the authenticity of the Last Letters from Stalingrad in one of his last publications. He spoke of 'great concerns...against the volume.' In this book, many things are true but probably not all. In addition to a 'uniform style,' Beyers also considered topics dealt with in the letters to be more than questionable. He considered the whole project an imitation of the book War Letters of German Students (1915). Also, the facts and figures and certain confessional outpourings of the letters did not coincide with his own experiences.

Despite all the doubts about their authenticity, Last Letters From Stalingrad ultimately remains controversial, especially whether and to what extent the letters, first published in 1950, are edited, manipulated or falsified.

I'm not very good at spotting "uniformity of style" (If I were I'd be dead sure about sock puppet identities amongst Althouse comments). I've read the letters several times and I don't really see that. However, having read and transcribed my own father's wartime letters home, I am struck by the near perfect grammar and similar punctuation of these letters -- all from different authors! I ascribe some of that to there having been a sole translator. Anyone who's ever done any serious German to English translation knows that a fair amount of syntactical rearrangement is involved. A sole translator might have recurring idiosyncratic tics. Perhaps the similarities are more evident in the German language edition (which I don't have but would like to own).

In my opinion, the best reason to doubt the authenticity of the letters is the lack of supporting original letters or transcripts. Allegedly, the original seven sacks of mail were ordered destroyed by the Nazis. But something survived the war to be transcribed and published in 1950. Where is this now? If the letters themselves did not survive the war then where are the original transcripts used to compile the collection? There is a chain of custody problem here regarding the extant evidence. Still, no one yet has proven that they are fake.

For me, the best reason to believe that the letters are real is just their extreme poignancy and their universal appeal: i.e., their effect--a few of them can still move me to tears, and this is certainly enhanced by authenticity. They just make life make more sense. Much like faith.

Posted by chickelit at 2:05 PM