In the fields of observation chance favors only the prepared mind.
—Louis Pasteur 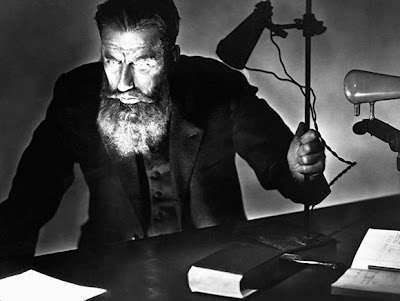 Wilhelm Roentgen (Röntgen for the purists & pronounced sort of like runt-ghen, i.e., with a hard "g") rocked the scientific world when he published Über eine neue Art von Strahlung ("On a new Type of Radiation"). The classic 1896 paper described experiments he had conducted the preceding fall. Just five years later in 1901, Roentgen received the very first Nobel Prize in Physics. The citation recited:


"in recognition of the extraordinary services he has rendered by the discovery of the remarkable rays subsequently named after him."

Roentgen didn't want "his" rays to be named after him, and so (in the English-speaking world at least) they are called by the term he coined: X-rays, wherein the "X" stood for "unknown". An account of Roentgen's serendipitous discovery of X-rays is well documented in the Wiki bio linked above. I have a copy of that first paper (in German) published as Chapter 11 in a remarkable book called The German Scientific Heritage by Reginald Phelps & Jack Stein (Copyright 1962 by Holt, Rinehart and Winston, New York). Roentgen wrote in that classic "tall-by-the-brook-standing-tree" syntactical style that seems so uniquely German. Yet Roentgen was an impeccable experimentalist and had already discovered many of the interesting properties of X-rays and set them forth in that first publication. Most astonishing, and perhaps convincing, was his inclusion of the first ever Röntgenbild: an X-ray photograph of his wife's hand, complete with ring: 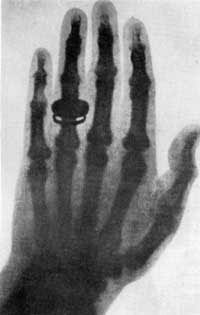 
I bring all this up for two reasons: First: heavier atoms in molecules and hence materials are easier to see with X-rays than are lighter ones. Bones are mostly made of calcium, phosphorus and oxygen: the former two elements #20 and #15, are twice as heavy as the "heavy" elements that make up soft tissue, viz., carbon (6), nitrogen (7) and oxygen (8). Hydrogen (1) is the hardest atom of all to see with X-rays. This is also why MRI is such a great complimentary technique to X-rays: it mainly locates (visualizes) hydrogen in water and hydrogen attached to carbon in soft tissues; bones are mostly invisible.  Chemists recognize the same complimentarity between X-ray crystallography and NMR spectroscopy.  Metals like gold (79) stand out even more sharply by X-ray.  Roentgen realized all of this in his now classic paper in which he tested the transparency of various materials.

Another reason to bring this all up is that screening methods at airports have been in the news lately. X-rays are used to screen luggage and people for bombs and contraband. A good primer on their use can be found here.  I'm still looking for a good reference on the techniques used for full body scans, especially since the apparent threat of bosom bombers would appear to challenge the current systems and methods in place. Plastic explosives like PETN can be distinguished from silicone breast implants, but apparently not without effort.

Meanwhile, Frau Roentgen is ready for her close-up now:

Posted by chickelit at 9:07 PM