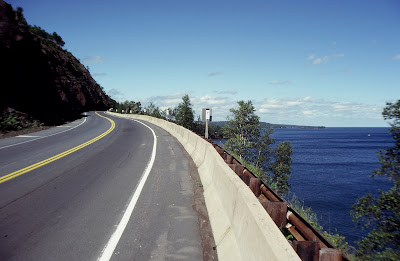 That photo was taken along Minnesota's Highway 61 by my late father sometime in the 70's. The concrete wall is kind of unsightly (imagine it's not there) and is a safety eyesore only then recently added. [Added: that stretch of Highway 61 no longer exists and has been replaced by a tunnel].

State Highway MN 61 follows the Lake Superior coastline from Duluth all the way to Canada. Prior to 1991, MN 61 was part of US 61, or as Dylan referred to it, Highway 61 (yes, that Highway 61).  Highway 61 was also called the "Blues Highway" and it stretched from Canada all the way to New Orleans. Before the interstate system, US 61 was a main route north-south, much like US 66 was a main route east-west. In my humble opinion, that particular stretch of MN 61 is one of the most beautiful and scenic drives in the continental US (and I'm including both coastal California and New England!).

Minnesota's Lake Superior coastline is shipwreck rich. Map The reason there are so many wrecks is simply because there were so many ships and also because the lake was a cruel and harsh place to navigate before modern navigational equipment. Duluth was once a leading shipping port city (at one time it had more millionaires per capita than any other America city). The ships came first to carry away furs and pelts from the interior; then they came for timber and grain; then for copper, and then finally, for the iron.

The Iron Range is (or was) a massive geological deposit of iron ore-so much that it fed the entire steel industry "downstream" at the other Great Lakes [added: about a quarter of it came from just one pit]. Great old industrial cities like Detroit, Cleveland and farther inland, Pittsburgh were built from it. Arguably, the only physical reason those cities were ever great (laying aside the great people for a moment) was simply the melding together of Appalachian coal and Minnesota iron to make American steel. The boom years lasted for well over a half century.

My dad started scuba diving up there in the early 1960's. He had an acquaintance who lived up there and who had discovered one or two shipwrecks. Back in those days scuba diving was still relatively uncommon, not at all like it is today. There were no dive shops (in Madison at least). Scuba tanks could only be filled at welding shops or fire stations. Some gas stations had air-compressors that went to high enough pressures but they usually didn't filter and the compressed air tended to be contaminated with pump oil. Diving gear had to be bought by mail order from companies that advertised in the back of magazines like Skin Diver or the likes. Most equipment was still manufactured either in California or Italy (it's probably all made in China now like everything else).

When I was 15 my dad took me on a scuba trip to Lake Superior along Minnesota's North Shore. My brother and I had been around diving since we were little kids, but he waited until we were older and had passed a certification course before taking us up there. He took us separately (there's a 3 year age difference there), mostly for reasons of space and equipment limitations: we always drove up from Madison and had to pack a week's worth of gear, camping equipment, and food.  I recently got around to digitizing some slides he took and so have decided to start yet another blog post series to remember all these things before I get old and forgetful. I'm still looking for some photos I took. At least there'll be pictures this time so don't go away.
Posted by chickelit at 1:56 PM