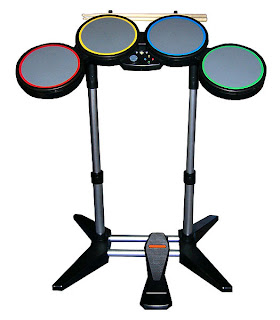 Today, September 9th, Harmonix Music Systems released the Beatles's music catalog as part of the Rock Band video game. If you're unfamiliar with "Rock Band" and "Guitar Hero," you probably don't have or know any teen or pre-teen kids (actually I first learned about it from our wild and crazy 30-something DINK neighbors).

We have the Wii version of "Guitar Hero." The Wii version is like the "Rock Band" video game, that is, the game allows one to play the guitar, vocal, bass, and drums for many popular songs. Of course you have to have the Guitar Hero "guitars" and drum kits that are adaptable to the wiimotes.

Guitar Hero has been derided by some because it doesn't really foster learning the guitar. Allegedly, Jimmy Page is withholding release of Led Zeppelin's catalog because he is upset that kids aren't learning guitar, but rather a simulated version of it. Also sayeth Page:


Obviously, there have been overtures made to Led Zeppelin, but if you start with the first track on the first album, ‘Good Times Bad Times,’ and you think of the drum part that John Bonham did there, how many drummers in the world can actually play that, let alone dabble on a Christmas morning? link.


He'll come around, mark my words, just give it a few more years, and a few lackluster sales of compilations.

But it's true: the "guitars" in Guitar Hero have no strings, only a right hand strum pick and a left hand set of buttons that allow you to "fret" notes and chords. On the other hand, the drum set- up for Rock Band features a set of four pads and a bass drum.

In my experience, the Rock Band drum simulator actually requires you to have or develop the same motor skills that it takes to play real drums. The drum set even resembles the sort of practice pads that real drummers use in lieu of a real set. So screw Page and Led Zeppelin for the time being.

Another great rock drummer was of course Keith Moon. Whereas John Bonham had controlled precision, Moon was all over the place, almost the essence of chaos. Moon had a top heavy, splashy style, having a much higher center of gravity than Bonham. Moon played double bass drums, forgoing the high hat cymbal for much of his playing style and sound. When I think of Keith Moon playing, I picture him riding his cymbals and tom toms and with both feet stomping his double bass drums.
Here's a video that gives you a good look at how "Rock Band" drums actually work:

Labels: 50 years of myTunes, Drums, The Who