Losing Site of the Mission? 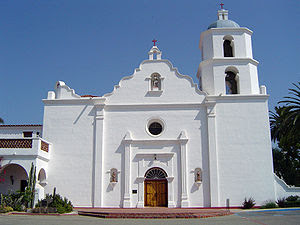 One interesting book on my shelf is called The Discovery of San Francisco Bay. The Portolá Expedition of 1769-1770. The book is a translation of the diary of Miguel Costansó, who was a soldier/engineer on that historic expedition. The title of the book refers to the fact that the Portolá expedition is credited with discovering the San Francisco Bay, that great natural harbor which lay hidden for more than two centuries after the first Europeans sailed up the coast of California. Costansó kept a very detailed diary and provides us with a mind's eye glimpse of what southern California looked like before californication. Here's his description of the valley where I live:


Tuesday, 18 July [1769]: The watering-place found by the scouts was little more than two leagues from Santa Sinforosa,[1] a distance that we covered in the afternoon. The country over which we passed was also hilly. The place where we halted was exceedingly beautiful and pleasant, a valley remarkable for its size, adorned with groves of trees and covered with the finest pasture. It must have been nearly a league wide, and different canyons opened into it on the north and northeast. The watering-place consisted of a pool or marsh of considerable extent. We camped on rising ground within the same valley, towards the west.[2] We gave the name San Juan Capistrano to the valley.[3]

__________________
[1] Now called Buena Vista Creek, northeast of Carlsbad. Highway 78 runs parallel to Buena Vista Creek.[2] The San Luis Rey de Francia Mission was built at this site in 1789. The Mission was named after King Louis IX of France , the patron Saint of the third order of Franciscans (aka St. Louis).
[3] Our valley is no longer called San Juan Capistrano; that name now belongs to a mission and town about 35 miles farther north.
The mission used to cover about 6 acres. Little by little, they've sold off the acreage. Over the years, the surroundings have become a mixture of commercial and residential development. But despite the change, the place retains its original mission: they're still Franciscans with an active community parish. Link

[update: more historical stuff on the SLR Mission here.]
Posted by chickelit at 6:33 AM