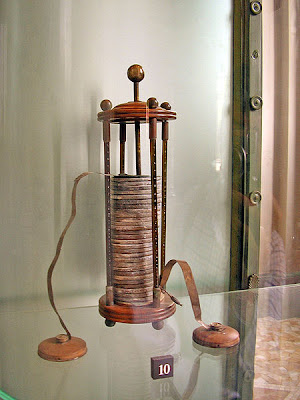 The other day at Costco I noticed one of those bilingual signs: “Batteries/Piles.” The Spanish word pila echoes the historical origin of batteries (cf. the obvious name from the photo above). In the year 1800, Alessandro Volta (the guy the Chevy Volt is indirectly named after) invented what became known as the voltaic pile, thus enabling the first systematic studies of how electricity interacts with matter.

Sir Humphry Davy seized upon the idea of electrolyzing dry molten salts and metal oxides with voltaic pile electrodes (the two wire thingies in the photo above). Davy prepared several elements for the first time, producing blobs of highly reactive metals at one wire when he electrolyzed molten natrium and kalium salts. Davy gave the new metals “ium” names derived from their material origins: sodium from caustic soda and potassium from potash. Davy was so persuasive, and his demonstrations so dramatic, that he successfully renamed the elements: natrium became sodium and kalium became potassium. Today, only the Germans use the older names, though they do survive in the modern chemical symbols, Na and K.

Lithium was discovered in mineral ore samples in 1817. Its discover, J. A. Arfvedson, thought it appropriate to name the new element after the Greek word lithos = stone [cf. lithosphere], to distinguish it from the chemically similar elements sodium and potassium, both of which had been first found in sea and land plant ashes. A year later Sir Humphry prep'd lithium metal by electrolyzing molten lithium oxide.

Metallic lithium is the lightest of metals, so light that it floats on oil; it would float on water too if it didn’t spontaneously react and produce combustible hydrogen gas: see link. The brilliant red color briefly seen in that video comes from gaseous lithium atoms “cooling” in the outer reaches of the flame by giving up red photons. Today lithium salts are used in pyrotechnics to give brilliant red colors.

Lithium sits near the extreme upper left corner of the Periodic Table, directly beneath hydrogen.* Lithium follows helium in sequential order, but the two elements couldn’t be more different. Explaining why helium and the other noble gases are so chemically stable requires a plunge into quantum mechanics (at least at the level of an elementary text book); suffice it to say that when moving from helium to lithium, the third electron that elemental lithium requires cannot share the same space as its first two electrons and must be held at a greater distance, i.e., be more weakly bound. The third electron is said to be a valence electron. The concept of valency comes from a Latin word meaning "combining power of an element" and refers to an element’s ability to gain, lose or share electrons.