More notes on "The Disappearing Spoon" 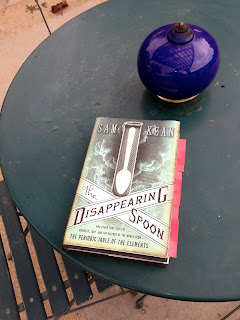 I'm reading a book and posting comments about it. I'm on page 27:


Electron behavior drives the periodic table. But to really understand the elements, you can't ignore the part that makes up more than 99 percent of their mass---the nucleus. And whereas electrons obey the laws of the greatest scientist never to win the Nobel Prize, the nucleus obeys the dictates of probably the most unlikely Nobel laureate ever, a woman whose career was even more nomadic than Lewis's.

Maria Goeppert-Mayer. I blogged about her here. She was the poster girl for how badly science used to treat women. Kean tells a good story, but mischaracterizes one aspect which I'd like to correct and add to. At page 28, middle of the second paragraph:


After the Depression lifted, hundreds of her intellectual peers gathered for the Manhattan Project, perhaps the most vitalizing exchange of scientific ideas ever. Goeppert-Mayer received an invitation to participate, but peripherally, on a useless side project to separate uranium with flashing lights. No doubt she chafed in private, but she craved science enough to continue to work under such conditions.

I object to the characterization of "useless side project to separate uranium with flashing lights," or whatever that means. What Goeppert-Mayer was working on was the separation of uranium isotopes, under the direction of H.C. Urey at Columbia University. I suppose that work could be characterized as "useless" because ultimately gaseous diffusion solved the problem. But Goeppert-Mayer did make a valuable contribution to science during the war. The results were declassified and finally published in 1947 and became the seminal paper for the science of isotope effect chemistry.

Years ago, I corresponded with Jacob Bigeleisen, the doyen of that branch of science. He was her junior coworker at Columbia U on the Manhattan Project and was a coauthor of the 1947 paper I mentioned above. I happened to ask him about his role in isotope chemistry and he opened up, telling me a great story involving her which I already blogged on here. It's long, but well worth a read. I'm just going to re-post the part where he later told a reporter about the amazing moment when he was briefly overwhelmed by Goeppert-Mayer's brilliance. Bigeleisen had been struggling to derive an equation and to simplify it. Goeppert-Mayer glanced at his work and instantly finished it for him:


She looked at my work and asked 'why don't you finish it up by taking out the classical part?'  Without a pause, she wrote the simplified equation, saying 'Now you have it; it's all done.' I didn't immediately understand what she meant when she said to cut out the classical part. I went home. I worked on it, and eventually I got the same result. link

I suppose that those with an ax to grind could subtitle that moment in time "superior female intellect briefly overwhelms male dominance." I'm sure that she had other moments later on. But all the players are now dead and together somewhere, I suppose.
Posted by chickelit at 8:01 AM