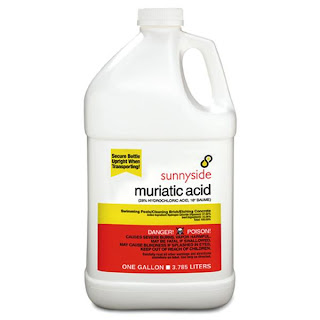 Chemistry is fraught with confusing synonyms and antiquated terms. "Muriatic acid" is such an example. The acid itself was known to medieval alchemists who concocted it from vitriol and sal ammoniac (the salt of Ammon). They discovered that it (in combination with lesser parts of nitric acid) would dissolve gold--whence the fanciful name aqua regia.
We owe the modern name hydrochloric acid to Sir Humphry Davy, who also dealt a great blow to French scientific pride. Davy (1778-1829) dealt with the nature and definition of acids which was the cutting edge of chemical knowledge in his day:

Davy gave the name chlorine to the element because of its color:


As the new compound in its purest form is possessed of a bright yellow green colour, it may be expedient to designate it by a name expressive of this circumstance, and its relation to oxymuriatic gas. As I have named that elastic fluid Chlorine, so I venture to propose for this substance the name Euchlorine, or Euchloric gas from ευ and χλωρος. The point of Nomenclature I am not, however, inclined to dwell upon. I shall be content to adopt any name that may be considered as most appropriate by the able chemical philosophers attached to this Society. link